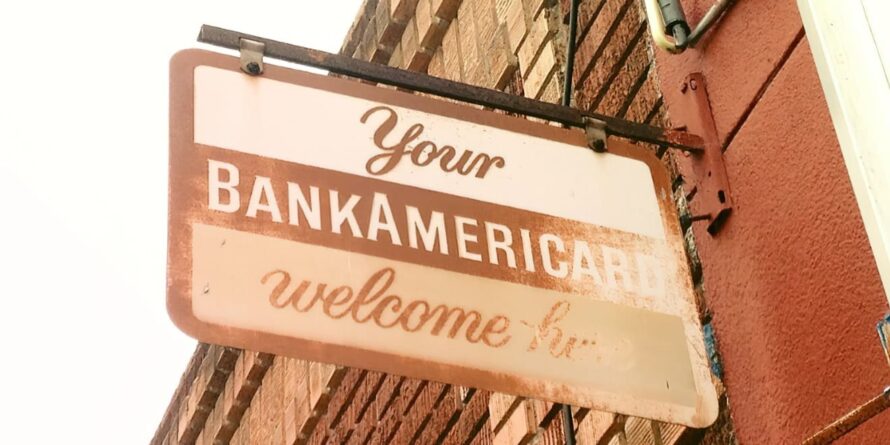 Time for that monthly tradition of going through your credit cards and deciding which ones you can pay this month. The average family in America today owes about $8,000 across several credit cards. Not only does it make it difficult to keep track of, it earned more than $30 billion for the credit card industry last year alone.

But did our grandparents have the same problems? Where did these little plastic money mints come from?

Some claim that they have their origins in the 1900s when oil companies and department stores used to issue cards to help create customer loyalty and improve customer service. These were very specialized and could only be used to make purchases with the issuing company.

The first card that was issued by a bank was named “Charg-It,” and was introduced by John Biggins, a banker in Brooklyn, in 1948.

The idea was simple. You simply take your card with you and when you use it, the bill is sent to Biggins’ bank who would collect the payment. This was a convenient system but it was only used locally and you had to have an account at the bank that the card was linked to.

The next year the Diners Club Card hit the stage. As the legend goes, a man named Frank McNamara was enjoying his dinner at New York’s Major’s Cabin Grill when he realized that he had forgotten his wallet. He talked with his partner, Ralph Schneider, and they decided that there should be an alternative to carrying around cash everywhere.

A few months later in February 1950, they returned to the same restaurant and paid their bill with a small cardboard card that they called the Diners Club Card. The idea quickly caught on and other restaurants started accepting the card as well.

The Dinners club card was still technically a charge card since the balance had to be paid off at the end of each month.

In the late 1950s, Bank of America introduced the BankAmericard, which became the first general purpose credit card and allowed the hold to carry a balance from month to month. Shortly afterward, they spun off a separate credit card entity that became known as VISA in the 1970s.

In 1966, other banks noticed the success of the BankAmericard and came up with their own rival cards. This network of bank owners pooled their resources together and created Interbank/Master Charge which eventually became known as MasterCard.

The real money started pouring in for the credit card industry in the early 1980’s as a solution to a much larger, nation-wide problem.

Most of the country was crippled in the 1970’s by runaway inflation and high interest rates. With the cost of money often peeking over 20%, banks in New York were unable to earn profits because usury laws capped interest rates at 12% for personal loans. As a result, banks were not lending as they would lose money on every loan that they issued.

To help loosen up the lending wheels, in 1979 South Dakota passed new laws that removed these limits to encourage banks to start lending money at whatever rate the market would bear. The year before the Supreme court had make a decision that basically stated that a nationally chartered bank could operate anywhere in the Union and follow the usury laws of the state that it was charted in.

This meant that if you had a bank in one state that allowed you to charge 25%, you could loan money through a bank in another state, even though the second state would only allow 12%.

In 1981, Citibank moved its credit card division to South Dakota, effectively allowing it to operate anywhere in the United States without restriction on the rates it could charge people.

Today the industry’s most profitable customers are the estimated 115 million Americans who carry monthly credit card debt and pay interest rates as high as 79.9%!!!

Credit cards have not always had their consumer’s best interest at heart and have been the brunt of intense criticism. “[Banks are] raising interest rates, adding new fees, making the due date for your payment a holiday or a Sunday on the hopes that maybe you’ll trip up and get a payment in late,” says Robert McKinley, founder and chairman of Cardweb.com and Ram Research, a payment card research firm. “It’s become a very anti-consumer marketplace.”

Despite this criticism, people continue to use them every day for their convenience and as a security blanket. So whether you use them to make an online purchase or just to buy a cup of coffee, it doesn’t look like we will soon be getting rid of the question, “Will that be cash or charge?”

How Financially Fit Are You?
Next article