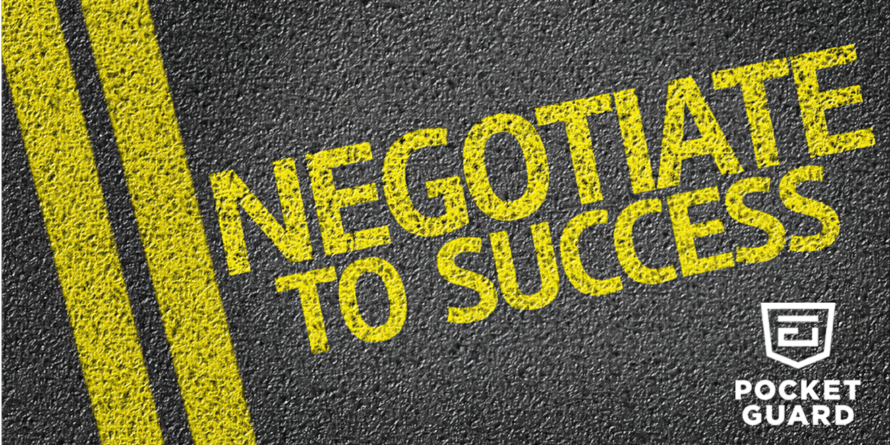 5 Negotiating Tips for the Non-Negotiator

“You miss every shot you don’t take.”

Maybe you are familiar with the phrase, but how often do we consider that it applies to shopping for deals?

In a 2013 Consumer Reports study, less than half of people even ask try to get a deal on the products and services they use on a daily basis. And it’s not because we don’t know how. The same study showed that nearly 9 out of 10 people have haggled in the past and were able to land a discount at least once.

Just the thought of haggling can feel intimidating to many people. Auther Ed Brodow says that “People are either afraid to ask for a better deal or are convinced it can’t happen. They become their own worst enemy if they don’t try. You have to have the ‘negotiation consciousness’: [the willingness] to challenge everything, be assertive and say, ‘This is too much,’ or ‘This is not reasonable,’ or ‘Can you help me out?’ ”

Looking at your money as points in a game, and negotiations as part of the playbook can take much of the stress out of the situation. Since PocketGuard is all about taking control of your finances in a fun way, we have put together five things that you can negotiate and some secret tips to help you take the shot!

1. Take a shot at … Appliances and Electronics

Did your washer or dryer conk out just after the big-box sale? Need a new TV for the Super Bowl party, but you blew your budget on nachos and beer? Don’t lose heart! Just ask about floor models, returns and overstocks. According to Kyle James, owner and founder of coupon and bargain-hunting site Rather-Be-Shopping.com, “Store managers typically want them sold immediately so they don’t take up valuable real estate,” he says. “These items will typically be marked with a special tag. Start the negotiating at 20% off the asking price and be prepared to meet in the middle.”

While many retailers, are reluctant to wiggle much on price, your big bargaining chip is the extras. Ask for a free extended warranty or delivery to save on the extras.

If you need to buy more than one big-ticket item, negotiate on them as a set and save even more.

James says he first discovered the power of bundling sales when he was shopping for a new HDTV and DVD player several years ago. He walked into a major electronics chain and simply asked the salesperson if they could knock $100 off the price if he bought them both right then and there.

“He went and asked his manager, and within a minute, he came back and said they could reduce the overall price by $75,” James says. $75 for one minute of effort — not bad.

2. Take a shot at … Interest Rates

Anyone who has ever borrowed money knows the pinch that even a small percentage point can make. But can we actually negotiate a lower rate on our credit cards, auto loans, mortgages or student debt?

One of your biggest bargaining ships is your credit rating and history. “If you’ve made late payments or have a bad credit score, you’re more of a credit risk, so the lender may not lower the rate,” says Priyanka Prakash, a finance specialist for FitBiz Loans, an online platform that helps business owners find financing. If you have a high credit score and a positive payment history, you can turn the tide in your favor as well.

It also depends on the type of credit you are dealing with. The more regulation surrounding a particular type of loan or line of credit, the less room you have to negotiate the interest rate. “Credit card rates are relatively easy to negotiate compared to rates on other [types of] debt,” Prakash says. “Student loans are difficult to negotiate because the rates are set at the federal level.” But small business loans and home loans fall somewhere in between, she adds.

Letting the agent know that you’ve been shopping around shows how serious you are about finding a lower interest rate. Telling your credit card issuer that you’re thinking of switching to another company’s 0% balance-transfer offer can be strong incentive for them to sweeten the deal for you. Or, bringing a written quote from a lender for a personal loan can make another bank more likely to match the offer. “Having the quote in writing shows you’re serious,” Prakash says. If there are any other factors that affect the deal such as a job loss or a medical crisis, we she recommends having that documentation printed and on hand as well.

If you are still not able to more the bar, try focusing on getting the loan fees reduced. Banks have much more leeway with fees that are charged directly by them, such as origination fees, application fees and closing costs, rather than those in the hands of a third party, such as appraisal fees or credit-report fees.

There are plenty of ways to save beyond clipping coupons. James says that the deli and meat counters are a great place to start. “In particular, look for hams and roasts that are less than a pound in size and politely ask for a discount,” he says. That’s because they may be too small to slice and sell, so the store may be willing to sell them for much less. “Start by asking for 50% off and negotiate from there.”

Picking up meats getting close to their sell-by date are another great place to look. “This works best if you’re buying more than one cut, so stock up and take it all off their hands for a discount,” he says. “Then you can freeze what you can’t use in the next day or two.”

Local farmers’ markets also usually offer heavy discounts if you buy toward the end of the day.

4. Take a shot at … Moving Services

If you are thinking of moving, just getting a couple of quotes can be enough to convince you that the mold in the basement and the 2 hour commute isn’t so back after all. But, whether you’re dealing with big or small moving companies, you can move their quote more than you might think.

Coming up with a quote for moving all your earthly possessions is more of an art than a science and no one wants to lose a sale over a couple of percentage points. When you meet with the salesperson, focus on reducing packing rates, box rates and the hourly loading rates.

So, you got sick. But the smiling doctors made you all better. Just when you get home and start to recover, you get a bill in the mail that almost sends you back to the emergency room! Before you start planning to fake your own death, there are a few things that you can do.

First, check over the bill carefully. It is not uncommon to be charged for the same procedure twice, or have a service improperly coded. Once you know what you are paying for, asking your doctor or hospital staff nicely for a discount can go a long way.

There are a “certain number of patients who never pay their bill, so they’d rather get something than nothing,” Brodow says. He tells the story of when he was recently billed $1,800 for a minor lab test. He went in to the hospital and explained that his insurance wouldn’t cover the cost and that he was older and semi-retired. The hospital agreed to lower the bill to $500!

The billing department has a lot of power to adjust your bill and since they routinely deal with hostile customers a little love can go a long way. Eldonna Lewis Fernandez, a corporate trainer and author of “Think Like a Negotiator: 50 Ways to Create Win-Win Results by Understanding the Pitfalls to Avoid” suggests starting your request with, “Is there any reason you can’t … ?” For example: “Is there any reason you can’t delay sending this to collections for a month so I can work on getting it paid?”

“You’re not asking, ‘Why can’t you?’ or ‘Will you?’ You’re changing the language of the question to invoke a positive response,” Fernandez says. The billing specialists likely won’t have a good reason why they can’t help fulfill your request. “That interruption [from a typical ‘no’ response] may be just enough to get the person on the other end to feel a little of the human element, versus the mentality of you just being another cog in the wheel of their job.”

Looking at negotiation as a game to be played rather than a conflict can help change your mentality to save you some money in the long run. Remember, it is their job to run a business and make money. They won’t agree unless it is in their favor and everyone wins. Help yourself and the businesses that you use to strike the perfect deal for everyone. After all, they want your business and finding a way to do business with them helps everyone score big!